Late last night, GO Public Schools’ PAC filed a campaign finance report showing a $300,000 contribution from the former Republican Mayor of New York City, Michael Bloomberg. This contribution takes GO’s fundraising to defeat our pro-public school candidates to over HALF A MILLION DOLLARS.  Bloomberg – whose net worth is $43.5 billion – pushed school privatization in New York City as mayor and had a troubling track-record on class size increases and equity for children of color in New York City’s public schools. 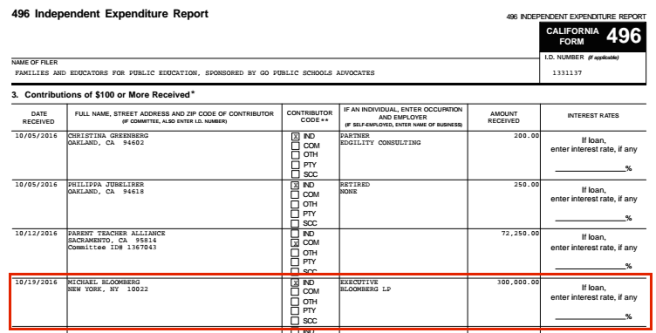 Oakland deserves better than Republican multi-billionaires, the Charter School Association and other outside interests manipulating our school board elections. Sign up today to knock on doors or make phone calls for our pro-public school candidates. If you can’t volunteer, make a contribution.

More on Bloomberg from The Nation:

“The mayor has sought to manage the city’s 1,500 or so schools and 1.1 million students as if he were running a business. Data, derived mainly from standardized tests, are his primary management tools. While focused on test scores, Bloomberg has allowed class sizes to increase, despite the fact that class-size reduction is one of only a handful of reforms proven to narrow the achievement gap (and is the top priority of parents, according to the Education Department’s own surveys).

“In a December 2011 speech, Bloomberg said that he would double class size if he could by firing half of the teachers, and that it would be “a good deal for the students.”

On Equity for Gifted and Talented Students:

“For the first time, Bloomberg also imposed a test-based policy for admissions into gifted and talented programs, which caused the percentage of minority children in these programs to plummet. Before 2006, community school districts devised their own policies and relied on more holistic measures. In 2006, 53 percent of students in these programs were black or Hispanic; now less than one-third are. Last year, in some large areas of the Bronx, too few children tested “gifted” for a single gifted class to be offered, while in wealthier parts of the city—where parents send their 4-year-olds to expensive test-prep programs—more than half of the children are deemed gifted.”

“The expansion of charter schools has been another source of widening inequity. Bloomberg has been an aggressive proponent of charter schools, which receive public funds but are run by private corporate boards. The mayor, together with a set of wealthy philanthropists, successfully lobbied to have the cap raised on charter schools in 2007 and again in 2010. Recently, it was revealed that he plans to start his own chain of such schools when he leaves office, and has assigned city employees to the task of designing them.” 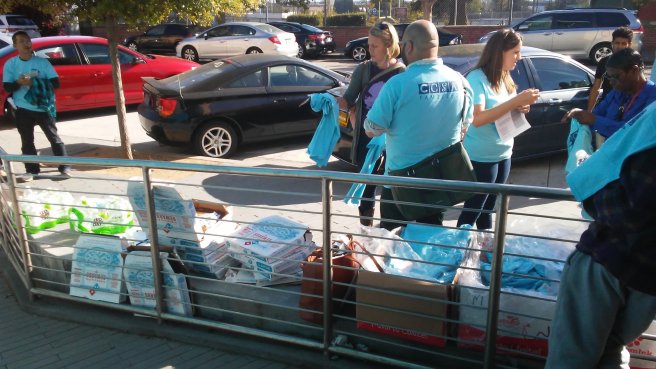 Many of the people looked like Oaklanders, but the brand new, fresh-out-the-box baby blue t-shirts that they all wore betrayed the fact that they were trying to advance an agenda that did not originate in Oakland. At two of the first three school board meetings this year, the California Charter Schools Association (CCSA) paid for pizza and drinks to mobilize families to come out and lobby district leadership to give money to privately run charter schools that Oakland voters had specifically earmarked for publicly run schools. It was reminiscent of many previous board meetings where shiny, private busses would show up full of charter school staff and families on a mission to make sure that their privately run, exclusionary, and unaccountable schools could get reapproved for more public funding.

As if suing OUSD last year to get their hands on more public land and lobbying the school board this year for access to funds that were meant specifically for publicly run schools wasn’t enough, the CCSA and other deep-pocketed charter advocates like GO Public Schools are also promoting a ballot measure this Fall that asks Oakland voters to force Oakland property owners to put even more public money into their private pockets.

Measure G1 proposes a third parcel tax for schools on Oakland property owners since 2008. Measure G, which passed in 2008, specifically did not allow charter schools access to its revenue. Measure G funds are the revenue that the CCSA is trying to tap into with their pizza and t-shirt giveaways. Measure N, passed in 2014, allows charter schools access to its revenue.

Oakland homeowners should not be asked to pay more just so that the charter school industry can pocket more.

Measure G1 supporters focus on the emotional argument that teachers are underpaid, and teachers absolutely are. However, while district leaders are quick to claim credit for negotiating a salary raise for teachers two years ago, they just unilaterally announced that they are gutting that raise due to lower than expected enrollment. Enrollment is low in OUSD because district leaders — whose campaigns are funded by GO Public Schools and the California Charter School Association — are proliferating and growing charter schools that siphon students and their funding away from OUSD-run schools.

The district is actually asking homeowners to pay $120 a year for the next 12 years so they can pay the teachers whom they are taking a raise away from while they simultaneously take credit for negotiating that raise. Seriously.

Additionally, according to a recent report commissioned by the district itself, OUSD spends too much on central administrators. When Superintendent Antwan Wilson is earning almost $300,000 a year and his cadre of compliant administrators earn six figure salaries as well, should homeowners be asked to pony up more money to pay the teachers who work under these high-paid administrators?

Charter schools have their own revenue streams in addition to our tax dollars, and are allowed to advertise relentlessly. Given that these privately run schools are in direct competition with public schools and the playing field is skewed in favor of charters, it is inappropriate that the district would ask homeowners to pay a third parcel tax for things that we are already permanently paying a parcel tax for, just so that charter schools can get more funding.

While parcel taxes are a common way for public school districts to increase revenue, they are unfair because low-income homeowners pay the exact same as wealthy owners of large commercial properties. So not only would the few teachers who can afford to own homes in Oakland be taxed extra for their own salary increases, they will be taxed the same amount that Uber pays for its prestigious Uptown Station property. There are other ways to tap into the vast resources available in this city, this region, and this state.

Like many Oaklanders, I voted for Measure N and Measure G because I saw no other options for our public schools. I won’t vote for G1, though. Rather than continuing to follow the lead of deep-pocketed charter school advocates, the district should focus more on actually improving OUSD public schools, which have many problems of their own that need to be addressed.

Please vote no on Measure G1.

Permanent absentee ballots were delivered in Alameda County this week. Share our pro-public school endorsements for the OUSD Board of Education with your Oakland friends and family today!

District 5 Read our endorsement of Mike Hutchinson and Roseann Torres

You can also download and print our slate card here: parents-united-for-public-schools-slate

Below are the short answers for our candidate questionnaire. Full answers can be found here. 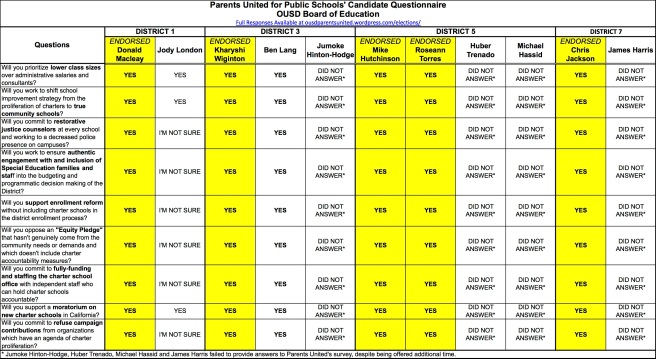 In Oakland, we have a democratically elected public school board which is responsible to voters, to parents, to teachers and community. Great Oakland Public Schools (“GO”) threatens to distort that democratic process by “just doing whatever it takes” to win seats on the School Board. It has already raised almost $150,000 to do just that, with still five weeks to go until the election. Almost $50,000 each from San Francisco billionaire venture capitalist Arthur Rock and local millionaire T. Gary Rogers, whose family foundation is interested in expanding charter schools in Oakland, adding 10,000 new seats by 2020. Money and support pour in from the California Charter School Association and local charter school supporters. Money given to ensure that our school board continues to be charter friendly, continues to open new schools and rubber stamp renewals of existing ones, continues to offer up our students and facilities to privately managed, distinctly non-democratic, charter schools. 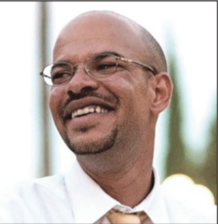 In District 5, candidate Mike Hutchinson is committed to public education in Oakland. Mike is a lifelong public school advocate, the son of two educators who has seen, in his 25 years working with youth, the dismantling of our public schools through school closures and charter school proliferation. Mike has witnessed first hand the impact of the state takeover of our district and how our board has failed to reassert its role as the protectors of our public schools. Mike is a passionate advocate for strong community schools, for re-prioritizing the budget to support those schools and for strong oversight of our existing charter schools. Mike is running an independent campaign with support from community, not corporate reformers. Mike would serve District 5 with integrity and the tireless commitment he has shown for the past five years and more, and Parents United for Public Schools is proud to support Mike Hutchinson for School Board in District 5. 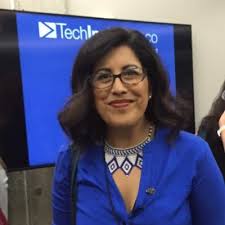 District 5 is unusual in that it is the only of the four districts up this year in which GO did not endorse the incumbent. Director Roseann Torres was elected in 2012 as the official GO-backed candidate, but has deviated from GO’s agenda and so now they are running someone against their former choice. Director Torres voted against several charter schools including GO favorite EBIA, publicly criticised the Common Enrollment proposal and has called for more oversight of the charter industry. She authored the Ethnic Studies legislation and opposed a possible charter takeover of Fremont High. While we would like to see Director Torres take a more consistent line on charters, we respect that she has taken a stand against corporate funders and GO Public Schools, and we are therefore also supporting Roseann Torres in District 5.

Under ranked choice voting in Oakland elections, it is critical that you vote for Mike Hutchinson AND Roseann Torres, and NOT for the GO endorsed candidate Huber Trenado or charter industry money man Michael Hassid. We have a unique opportunity here in Oakland to take a stand AGAINST corporate money and FOR democratically elected candidates supported by parents, teachers, students and community members, independent leaders who will help us strengthen our public schools. 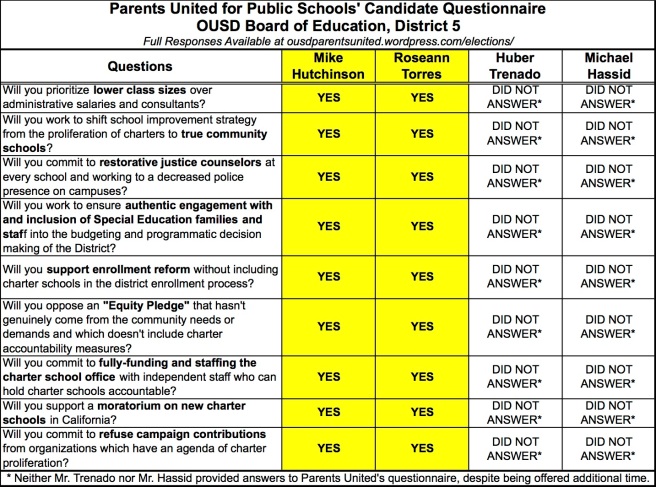 Ways to help Mike and Rosie: Go to their websites and Facebook pages, like and share, donate to the campaign, volunteer to knock on doors or phone bank.

You can find full answers to Mike’s and Rosie’s candidate questionnaires here.