This is the place to find information about the 2016 Elections to help parents, students and other community members understand how candidates for the OUSD Board of Education intend to represent our public school communities, if elected. We will be posting our Candidate Endorsements, links to the completed candidate questionnaires and information about state and local education-related measures, so check back in the coming weeks. 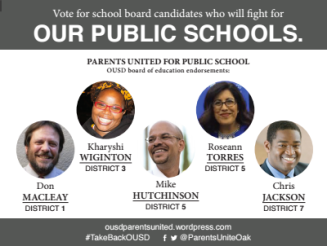 Download a palm card to distribute at your school here: Parents United Slate

Campaign Finance Information – See how Candidates in D7, D5 and D3 are benefiting from big money corporate and privatization donors.

Jumoke Hinton Hodge: Did not respond, despite acknowledging receipt and being offered several additional days to complete the questionnaire.

Huber Trenado: Did not respond, despite being offered several additional days to complete the questionnaire.

Michael Hassid: Did not respond, despite being offered several additional days to complete the questionnaire.

James Harris: Did not respond, despite being offered (and thanking us for) several additional days to complete the survey.

*We were unable to reach one candidate in District 3, Lucky Narain, despite multiple attempts.