“The departure of Superintendent Antwan Wilson midway through his contract to lead our schools presents Oakland with a unique opportunity to learn from the mistakes of the past, and select a new leader who is committed to making a difference in our students’ lives and who will stay in Oakland long enough to see those changes through.

“The past two years have seen a decline in enrollment while upper-level administrative salaries have skyrocketed more than 500%. Major changes in the Programs for Exceptional Children and Student Enrollment have come without meaningful input from parents, teachers, staff or community, and the departure of long time administrators has further destabilized the district. Planning for major district initiatives has been made in closed meetings with charter leaders, but without input from our public school community. It is time for our District to put our public schools first by hiring a superintendent who believes in our public school system, who will work to create true community schools that will support and educate the whole child, and who will stay at least long enough to see those changes through.

“We call on the School Board to conduct an open and transparent search for a new superintendent in partnership with those most impacted by District policies: students, parents, teachers, staff and true community-based organizations. Our children deserve a leader with deep connections to Oakland, a strong belief in its public schools and a commitment to following through with the transformation of OUSD as a quality full-service community school district.”

Oakland, CA: On election eve, current and former Parent Teacher Association (PTA) leaders from a number of schools within the Oakland Unified School District are speaking out against a misleading campaign by Wall Street & Silicon Valley billionaires trying to influence local school board elections.

The special interest campaign, which is flooding local school board elections with outside money, is being heralded by a Super PAC that calls itself the Parent Teacher Alliance.  This appears to be an attempt to confuse voters and dupe them into thinking that the campaign is being supported by the more traditional non-profit & non-partisan Parent Teacher Association. Concerned by the apparently intentional similarities between the name selected by the political Parent Teacher Alliance and that of the non-profit PTA, the California PTA put out a press release in June of this year informing voters that the Super PAC is not connected to the Parent Teacher Association.

“We believe they are using the name ‘Parent Teacher Alliance’ to mislead voters. Oakland schools are not for sale, and Oakland parent leaders will not stand by while these outside billionaires attempt to mislead voters,” stated Kimi Lee, the President of the PTSA of Melrose Leadership Academy.

PTA and PTSA leaders from schools throughout Oakland released the following statement:

The Parent Teacher Association is a national non-profit organization with branches in every state and region that serves all students and never endorses political candidates. It is trusted by parents, teachers and communities throughout California (and the country) as a voice for public schools and children.  By contrast, the similarly named Super PAC “Parent Teacher Alliance” is a political organization sponsored and funded by the California Charter Schools Association Advocates, which floods communities with outside money from Wall Street and Silicon Valley billionaires in order to convince voters to support their endorsed school board candidates.

The National and California PTA have expressed concerns about the apparently deliberate similarities between the naming of the Super PAC and the PTA, issuing a “cease and desist” letter and a statement that the use of the name “gives an appearance … that seems to trade on the credibility and reputation” of the PTA, causing public “confusion.” We join with the PTA in protesting the misleading and continued use by the Parent Teacher Alliance of a name which causes voter confusion and may result in unintended and unfair outcomes.

As the Chair of the Fair Political Practices Commission we demand that you ensure voters are not misled in this election, and future elections, by prohibiting this Super PAC from using the Parent Teacher Alliance name. This Super PAC is NOT affiliated with the PTA and there are many parents, including the undersigned, who oppose its involvement in our school board elections in this unfair manner.

** Titles for identification purposes only

The Oakland parent leaders have also put the statement online as a petition for other PTA members and leaders to sign at the following URL: http://bit.ly/StopMisleadingParents.

While Oakland parents and our community have decried out-of-town Billionaires spending big in our school board races, including former Republican Mayor of New York, Michael Bloomberg, the Super PAC that received the contribution, and the candidates benefiting from it, have not.

So, this begs the question: what are Michael Bloomberg’s values?

As Mayor, Michael Bloomberg sought and received control of the schools from the elected school board. Under mayoral control:

Are these education policies that GO is proud of and Director Hinton-Hodge shares? Will James Harris or Huber Trenado denounce them?

Mayor Bloomberg was also responsible for the racist “Stop and Frisk” policy in New York that resulted in 4.4 million often innocent people of color being harassed. The practice was found unconstitutional because 83% of those stopped were people of color, despite only representing 58% of the population. In a study of stops in 2011, 9 out of 10 of the stop and frisk victims were not arrested.
When will GO Public Schools Advocates, Jumoke Hinton-Hodge, James Harris, and Huber Trenado denounce these donations, and the agenda they are trying to push on Oakland schools?
Oakland deserves better than this. Vote for The People’s Slate on Tuesday. 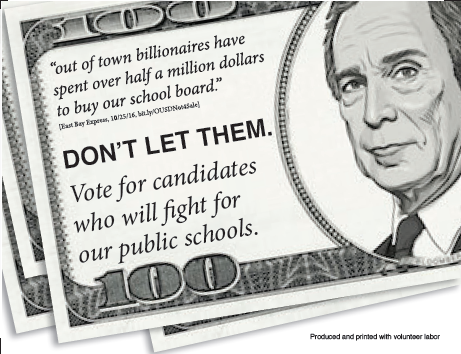