IT IS TIME for Superintendent Johnson-Trammell to live up to her stated values of TRANSPARENT AND HONEST COMMUNICATION and explain HOW relying on a consultant who is named as a defendant in an alleged immigration controversy, was accused by Black students of ignoring their concerns about racial harassment and of referring students to police for minor infractions, and has a billionaire-backed agenda, is putting students at the center of our Sanctuary District. At a time when OUSD is declaring #BlackLivesMatter and we are on the verge of getting police OUT of our schools, having Dr. Tommy Chang shape our strategic plan for the next three years is totally inappropriate. 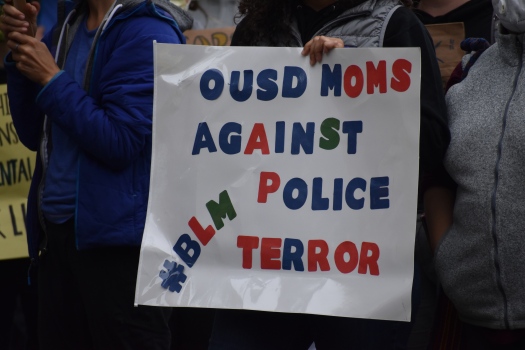 When Superintendent Antwan Wilson resigned and the full scope of the trauma caused by his mismanagement and overspending became clear, Parents United believed that we had a “unique opportunity to learn from the mistakes of the past, and select a new leader who is committed to making a difference in our students’ lives and who will stay in Oakland long enough to see those changes through.”  In the 16 years leading up to that point, OUSD had a revolving door of 9 superintendents, half of which were Broad Academy Graduates, a billionaire-funded institution where churn and burn is a prominent feature. Administrative salaries in OUSD ballooned while students suffered, and the Oakland community demanded a change: a local superintendent who is invested in Oakland and not beholden to billionaire special interests.

The Black Organizing Project (“BOP”) made clear that OUSD needed to divest from the Broad Academy:

The Broad Urban Superintendents Academy is financed by the Eli and Edythe Broad Foundation.5 Eli is a billionaire real estate developer from Los Angeles who has ambitions to completely “remake” public education. According to an article by the New York Times “His foundation has pumped $144 million into charter schools across the country, is embroiled in a battle to expand the number of charters in his home city, and has issued a handbook on how to close troubled public schools.”6 The corporate interests and consistent ties with OUSD is a cause for concern. Are corporate billionaires, who are interested in how to expand their capital, really concerned about the education of underserved Black and Brown students? The answer is simple. No! We do not need anymore superintendents with corporate connections and affiliations. Oakland students do not need corporate candidates, with corporate aspirations to lead their school district. We need educators and leaders who are truly invested in the success of Oakland students. We need the community. (bolded emphasis added).

The mandate was clear. Center our most vulnerable students. Be inclusive of student and parent voices. Be transparent. Reject the misguided policies of previous administrations which undermined our public schools and failed our students.

OUSD has too many consultants – according to the Alameda County Grand Jury three times the state average. You would expect, then, that the administration, and the Board of Education, would scrutinize potential consultants to ensure that they are qualified, necessary and in keeping with the values of our district. So WHY has OUSD hired a consultant who was forced to resign from his last Superintendent job just one week after being accused of disclosing student discipline records to local police and ICE, allegedly resulting in at least one student deportation? OUSD is a Sanctuary District [at least regarding immigration – as Black students, BOP, and others have rightfully pointed out in recent weeks, OUSD is not a sanctuary from police terror for our students], and our students deserve to have that value reflected in the people that are hired to shape and execute district policy.

Buried in the consent agenda for the board meeting on November 13, 2019 was a no-bid contract with Tommy Chang of Chula Vista to provide “support for strategic planning.” The board approved 6 to 0 (with one absence) the consent agenda after retreating to a private room upstairs while the community protested the board’s lack of transparency and responsiveness to their concerns. There was no discussion, no questions by board members, just one vote on all 67 items in the consent agenda.

According to the contract attached to the agenda, Tommy Chang is tasked with:

The “Specific Outcomes” for this contract are identified as follows: “These contractor services will result in a new district strategic plan; augmented and enhanced strategic communications to transparently and effectively engage and communicate with stakeholders about district priorities and direction; increased central office leadership capacity; and recommendations and plans for continued movement toward coherent and effective central office.” The contract is to run from November 1, 2019 through June 30, 2020 for a total amount of $78,000.00.

However, according to documents received pursuant to a Public Records Request  Dr. Chang’s work was already underway on September 5th, 2019, some two months prior to the date of the contract approved by the board. According to that email (which you can read in its entirety below) Superintendent Johnson-Trammell is “working closely” with this consultant to “reshape” the Superintendent’s work plan, provide communication strategy and support the Superintendent in the development of a new 5 year Strategic Plan.

Email obtained via a Public Records Act Request from OUSD:

The Superintendent provided a partial introduction to this consultant, Dr. Tommy Chang, in the above letter to her Senior Leadership Team, but she left out key details which should be noted:

So, assuming that we actually need ANOTHER consultant to guide us, is Dr Chang the right person for the job? The answer is a resounding “hell no”. The fact that Dr Chang is credibly accused of providing student incident reports to ICE, putting students at risk of deportation is enough reason to disqualify him. That he has a history of mistrust and over-policing in the African American community is enough. That he was forced to resign and described as “unable to communicate” effectively, not just with families but with members of his own team, and “wasn’t able to motivate people” makes him absolutely unqualified to “coach key leadership members” and bring about “organizational coherence”. That he is a Broad Academy trained disgraced former superintendent is enough. Dr Chang does not represent our values of sanctuary and equity, and he lacks the skills needed to undo years of dysfunction that have led us to this place. Dr. Chang should not be visioning the future of OUSD.

1. The Broad Academy is funded by real estate billionaire Eli Broad to train superintendents how to run a public school system just like a business, with burn and churn being a prominent feature.

Joint Study by In the Public Interest and Parents United for Public Schools shows that in Oakland, Calif. alone 30 charter schools received nearly $19 million in federal PPP dollars meant for those in need, despite unchanged state public education funding.

OAKLAND – A new report released today shows that millions of dollars in federal relief funds intended for those in need have been siphoned off by public charter schools that have suffered no loss in state education funding while thousands of small businesses remain shuttered and their employees go without work due to the pandemic.

The report focuses on 43 charter schools located in Oakland where 70 percent of the publicly-funded but privately-managed charter schools within the boundaries of the Oakland Unified School District applied for and received federal Paycheck Protection Program (PPP) awards established by the federal CARES Act. Traditional public schools in Oakland and elsewhere are not eligible for PPP funding. The report, entitled Are Oakland Charter Schools Double Dipping?, was conducted by the Oakland-based Parents United for Public Schools and the non-profit research and policy center In the Public Interest.

The findings are significant because California’s open meetings laws require board meetings and the minutes of charter schools to be made public.. In most of the country, charter school finances are less transparent, and the U.S. Department of the Treasury has refused to release the names of recipients of PPP awards. The United States has 7,000 charter schools.

“This report shows the need for more oversight and transparency in the charter school sector,” said Clare Crawford, senior policy advisor with In the Public Interest. “It’s not right for charters to act like a business on Monday and a public school on Tuesday. Having it both ways leads to double dipping and unethical raids on the public till.  We deserve to have the full picture on how precious public dollars are being spent, especially now, during this time of need,” she said. “Every local public official and reporter should be asking if their charters took PPP money and how much.”

The New York Times cites the Oakland study in a story today, “Charter Schools, Some With Billionaire Benefactors, Tap Coronavirus Relief,” that finds further examples of double dipping by charter schools all across the nation and documents how the charter school industry has sought federal dollars intended for private business’ struggling due to the pandemic.

Some key elements of the Parents United for Public Schools/ In the Public Interest report  include:

“It’s really concerning that so many charter schools are choosing to take these funds from local small businesses that employ Oakland families. If charter schools receive funds as a ‘public school,’ they should not then be eligible for small business loans intended to help keep families from being laid off,” said Kim Davis, a parent and co-founder of Parents United for Public Schools.

Charter schools are considered public schools under California law, as they are in many other states, yet they are also incorporated as nonprofit organizations. This has allowed them to access both public school funding and aid intended to support maintaining employment at small businesses and nonprofits.

Parents United for Public Schools is an independent, parent-led organization focused on building a strong parent voice on behalf of Oakland’s public schools. In the Public Interest is a nonprofit research and policy center that studies public goods and advocates for building popular support for public institutions that work for all of us.