Two years ago, we dug into the data for two co-located high schools in East Oakland to see who those schools, located on the same campus, were serving, and the results were startling. The two school populations were not even close to similar, despite, in theory, drawing from the same pool of students. If charter schools accept public money, shouldn’t they be serving all kids?

Last year, we looked at all the schools that were offered to charter schools for co-locations to see which schools are targeted, and it was clear: OUSD schools with high populations of Black students and English Learners, vulnerable Special Education and Unhoused students, and low income students. These co-locations pushed students from classrooms into closets and disrupted the learning of OUSD students.

It is now Prop 39 season again, and like last year and the year before, charter schools who are or will be co-located with District schools do not serve the same student populations as the host district school. Comparing the data from OUSD schools to the charters reveals a stark pattern: charter schools serve far fewer in virtually every category of underserved student population group: 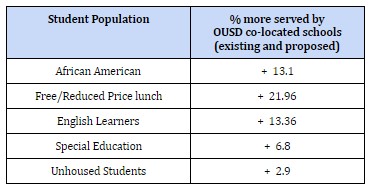 Just as when we compared the two co-located schools in East Oakland, the results are clear, and extremely concerning. Charter schools in Oakland, at least those in District facilities, are excluding certain students in ways that concentrate need in co-located district schools. At the most extreme, the population differences can be jaw-dropping. Brookfield serves 19% more special education students than Francophone, and likely a far greater percentage of moderate to severe disabilities. A recent report of special education in OUSD and other California Districts makes that clear:

It is not just special education students that will be impacted by this co-location. According to District 7 Director James Harris, 40% of Brookfield’s children are experiencing housing insecurity. These children need the “underutilized” space for community services, not displacement by the far more affluent and privileged Francophone families.

None of the potentially/already co-located charter schools are listed as serving foster youth, and only half of them have any unhoused students. At Castlemont, 13.3% of students were experiencing housing insecurity in 2018-19, and it is likely higher today.  Yet the long co-located LPS only shows 1.86% of students as unhoused, a truly heartbreaking 11.44% discrepancy. These two schools have been co-located for more than 15 years, yet Castlemont’s student population is one third African American and two-thirds Latino compared to 90% Latino for LPS, while Castlemont serves English Learners at a rate of 2 to 1 over LPS. Castlemont serves more Special Education students and Foster Youth than LPS. After 15 years in the same community, it is clear who is being chosen, and who is not.

Charter schools like to refer to themselves as “Public Charter Schools” because they want us to believe that they are a public good in the same way our district schools are. The truth is, they are not serving all kids, and although they take public money, they are not public schools. The charter schools being offered space are on average whiter and more affluent than the District schools they are to occupy. They contribute to the pushout of African American students that is happening across our city. They do not serve foster youth, homeless students, English Learners or differently-abled students in large numbers, while District schools are serving all kids, regardless of need. The spaces that are being offered up as “underutilized” are in fact critical for educating kids in those district schools. I hope that the charter schools which have been offered space at our schools, charter schools which we know are NOT including all children, will not compound the inequities that failure to serve creates by taking away learning spaces