We have run a series of posts about how GO Public Schools and their billionaire benefactors including Michael Bloomberg have flooded our local school elections with so much cash that grassroots candidate voices are completely drowned out. The billionaire backed PAC spending is twice as much as the spending of all of the candidates who have run since 2012 and the teachers’ union contributions combined. This year alone, contributions include $500,000 from Bloomberg, $37,500 from Billionaire Arthur Rock, and most recently $75,000 from Oil and Gas Billionaire Stacy Schusterman from Tulsa, Oklahoma (whose family money was recently rejected by the Biden-Harris campaign as being contrary to their values).

It is hard to quantify the breadth and scope of the ways that this GO-bought Board has utterly failed in its responsibilities to the children of Oakland. Don’t take our word for it, the Alameda County Grand Jury was very clear in its 2018-19 report:

In our last post, we laid out some of the absolutely shameful ways that the GO backed board misspent General Fund revenues that should have gone directly to services to our students with greatest need. Despite these failings, GO doubled down on its candidates in 2016 and got them re-elected for four more years. Let’s now take a broader look at the impact of GO’s political spending in OUSD and what it will mean for the future if we let GO buy the four seats up this year.

Just weeks after the 2016 election, GO-backed Superintendent Antwan Wilson announced that he was leaving Oakland to take a job in Washington D.C., not at the end of the school year, but right in the middle. GO was quick to praise Superintendent Wilson for his “hard work”, stating that “he has left a strong foundation for the District to maintain the progress that it’s making.” GO-backed board member James Harris called his departure “a loss” and Director London, also backed by GO, blamed the OUSD community for creating a “challenging” environment by fighting for children and against the GO/Bloomberg agenda that Superintendent Wilson was pushing. As explained by former school board member David Kakishiba, the GO-backed School Board chose the “allure of a rising national leader” over the children of Oakland, because that is the model that GO and its funders demand of their supported candidates.

Before Superintendent Wilson made it out of town, reports surfaced that OUSD had a $30 million deficit (comparable to the debt that resulted in the state takeover of the district in 2003) despite having $136 million in additional annual revenue since 2012. As The San Francisco Chronicle put it, “It’s as if the district has loaded up the shopping cart with costly commitments and proposed programs, but is now standing at the cash register with an empty wallet and a nearly maxed-out credit card. If it wants what’s in the cart, it’s going to have to figure out what bills will go unpaid.” 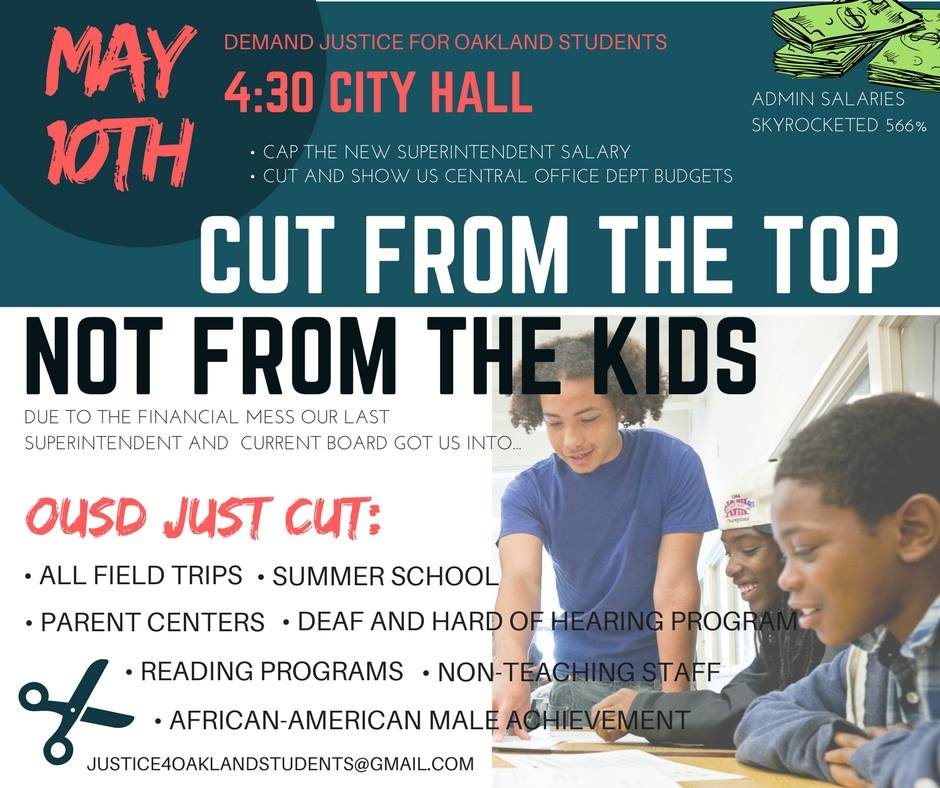 Once again, it was the debt to students that went unpaid. School site budgets were frozen, meaning: no school supplies, no field trips, cuts to student centered programs for special education students and laying off employees who work with young people. This was followed by an additional $17 million in cuts to schools and student services for the 2017-18 school year. But this GO-bought board was not finished yet.

The Cuts Kept Coming, Despite up to $200 Million in New Revenues

In October, 2017, the largely unapologetic GO-bought Board declared the need for $15 million in mid-year cuts, after $32 million in cuts since January. The GO-backed board ultimately voted to cut $9 million in December, effective immediately. That meant that programs and services that had already been budgeted for had to be immediately terminated. Students once again paid the price. High School students testified at a November 27, 2017 board meeting that they felt that under resourced schools like Castlemont and Fremont “don’t matter” to the GO-backed board, while parents felt their children’s education “slipping away”.

Then the GO-bought Board Gave Itself a Raise!

In a shocking “let them eat cake” moment, a majority of the GO-backed board voted to give themselves a raise less than a month after having laid off employees right before Christmas, and cutting 9 million from school sites and services. At this point, OUSD was benefitting from $165 million in new state revenue,  funding OUSD received for the high number of students with significant identified needs under the Local Control Funding Formula. Due to its massive overspending and misprioritization of those revenues, the GO-supported board had now cut nearly $50 million from schools and services. In what felt very much like a “screw you” to students, they declared that they deserved recognition for their “hard work” and many hours of overtime they were forced to put in to clean up the fiscal mess that they themselves had created. This was truly a low point in this board’s commitment to OUSD students.

The GO-controlled board has continued to cut spending in the 2018-19 ($10 million), 2019-20 ($20.2 million) and 2020-21 ($20 million) budgets, while acknowledging that they were at times “not confident in [the] accuracy” of those budgets. Students were once again left behind when the GO Board cut the Supper Program that our most vulnerable students depend on, and students were forced to go to the City Council to get reinstated. Oakland’s most vulnerable students were likewise completely disregarded when the GO-backed board cut Foster Youth Case Managers and Restorative Justice Practitioners, in addition to across-the-board cuts of 50% to schools site base budgets, plus an inequitable “Equity Formula” that was intended to soften the blow of cuts to high-needs schools, but excluded all schools serving a majority Black student population. 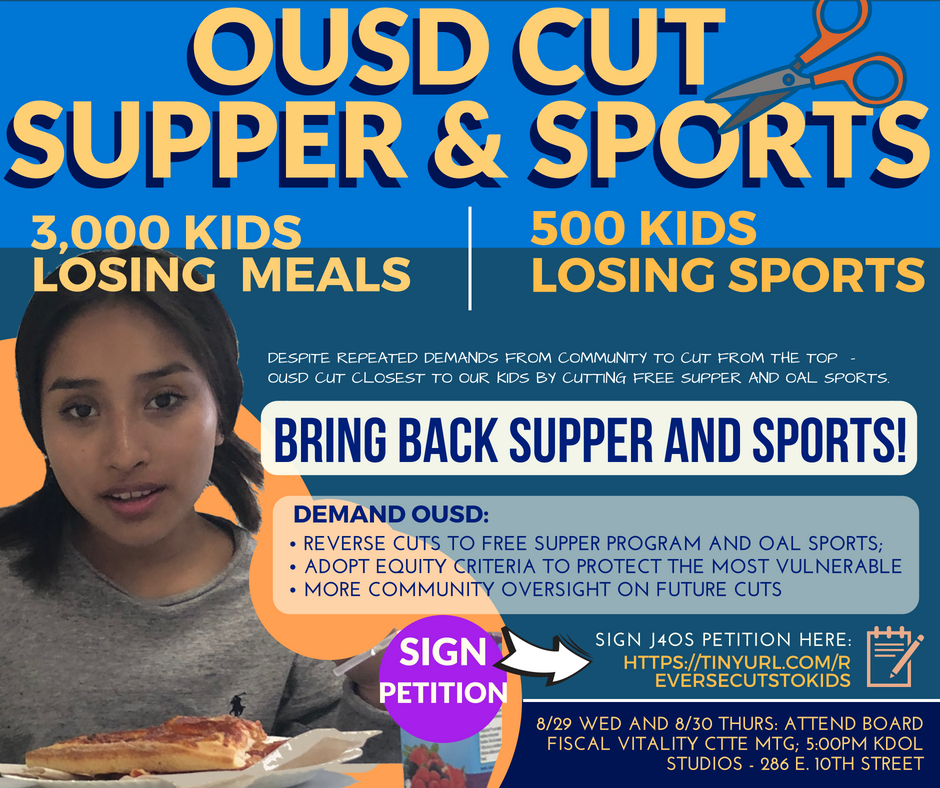 The GO-funded board nonetheless continued to invest in high-priced consultants, including a Financial Consultant at $32,000 per month and wasting $2.3 million on a contract to prepare a Facilities Master Plan that was never completed. This GO-backed board then hired ANOTHER consultant on April 10, 2019 to finish the work at a cost of $300,000, which was increased to $423,000 several months later in order to complete the plan and an additional $200,000 after that to “reconcile the data” and “close out” the Facilities Master Plan.

There are countless more examples of the misplaced priorities of this GO-financed board, which has consistently prioritized GO-backed policies over the Black, Brown and low-income students in the schools they were elected to support. The families and teachers of Oakland know that this GO-bought board is not interested in supporting our community schools and our students. You don’t have to take our word for it. OUSD recently polled likely voters in Oakland and asked them how they felt that the OUSD School Board, elected with millions in Billionaire funding, was doing its job, and an astonishingly low 14% of the respondents had a favorable opinion of the Oakland Unified School Board. Even worse for GO – over the period that GO and its friends have spent $1.4 million to stack the board with Directors on board the Bloomberg/GO gravy train, the favorable opinion of the OUSD board has gone down 21%. 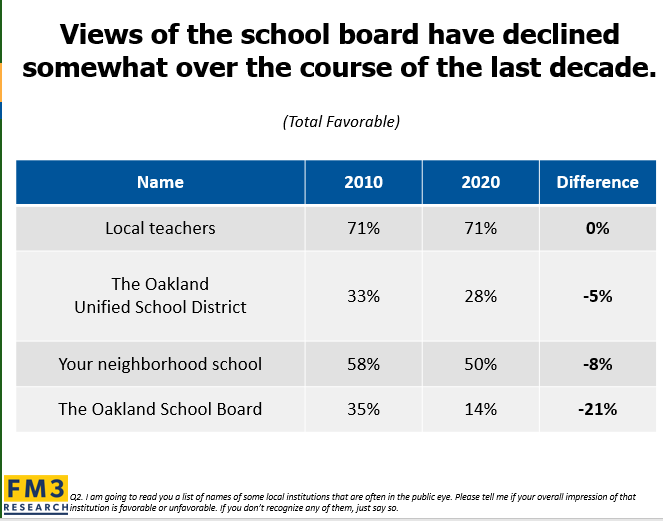 The Children of Oakland deserve better, and it is time for a change. GO has been buying the school board through the last 4 elections, enough is enough. Don’t be distracted by the glossy mailers with promises of change. GO has had its chance. Flip that mailer, read the fine print, and vote for candidates supported by Oakland’s teachers and parents, NOT Michael Bloomberg.