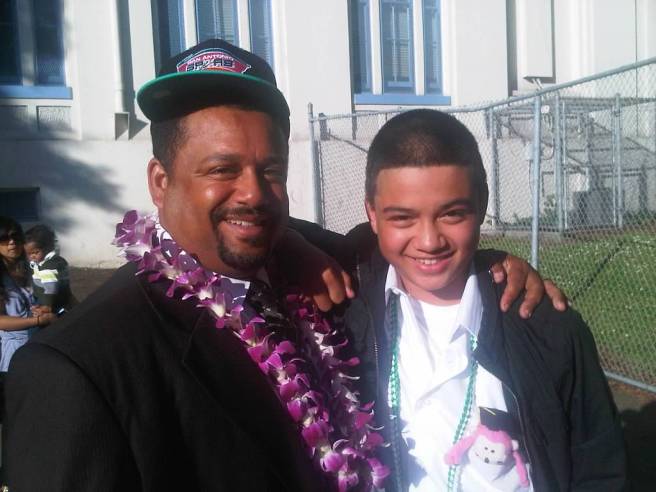 The letter below was written by a former Westlake Middle School student about Mr. K, Westlake’s Principal, who is being removed from the community he has led for the last 15 years. Mr. K is a visionary leader who has the full support of the Westlake community. It is widely believed that Mr. K is “being punished for not keeping a lid on parent and teacher protests last June, when the district unsuccessfully tried to force the school to ‘co-locate’ a charter high school at the site.” This former student’s words show why Westlake needs Mr. K, and why our District’s leadership needs to support the Westlake community, not tear it apart. #OneWestlake

A Commitment to Excellence

I remember back when V and I (who took his own life after eighteen years on this Earth) would make the journey down to Laney College after school on Wednesdays in hopes that we’d come up on an iPod or a nice watch. I remember when R, J, and I would go down to MacArthur and pick up an ounce from Marv for $20, in hopes of flipping it on the block after school got out on minimum days. I remember M catching his cousin after school down the street from Whole Foods and stomping him out on the curb for stealing a TV from their grandma’s house. I remember B pulling a gun on my little brother.

I don’t recall these things with pride, or to scare away any family thinking of sending their children to Westlake—I attended Westlake seven years ago, and all of my experiences were the product of me actively looking for trouble. If I’d continued down the road I was headed in my preteen years, I would be writing this either from a jail cell or from the beyond. It was in my eighth grade year that I changed course, and I have Westlake Middle School to thank for my life; a Westlake Middle School under the leadership of Misha Karigaca.

When I was caught in the halls of Westlake in my final year, with more than a couple of dimes and intent to sell, it was Mr. K that gave me my wake up call.

“What do you see yourself doing in four years…?” He sat next to me. Even though he was much wiser than the students, he never made us feel small. I’ve dealt with my fair share of authority figures in Oakland, but Mr. K was one of the most successful because he treated each and every one of his students with respect. He knew our parents names, our aspirations (if we had any at that point), and what we intended to do about it. Each of us was a person; not just a student ID number in a computer that could affect the school’s funding.

“Well, I guess we’re supposed to go to college, right? But that’s done now.” My lip quivered. I’d just been caught with weed on me at school, all packaged up and ready to go. I was also thirteen. In that moment, I thought my life was effectively over.

“Why? Because you made a mistake?” He asked me. I nodded slowly. There was a window that looked out to the front yard in the front of the school. Some of my friends were watching me. I wasn’t gonna cry. “If you want to go to college, this isn’t gonna stop you. But what do you want to do?”

Mr. K, who is very open about his experiences growing up in Oakland Public Schools, has successfully (to my own understanding) and lovingly nourished an environment with resources that he had wished for and needed as a young black male in Oakland. Westlake is a place where young people from all racial and social backgrounds come to learn, to succeed, and to thrive. He’s made a commitment to excellence for all of his students, but I think his unique perspective on this is what makes him indispensable to Westlake.

Unlike many other teachers and principals I’ve encountered, Mr. K knew that in the diverse setting of an Oakland Public School, my excellence was not my peers excellence. He knew me as I was in my seventh and eighth grade years: cutting school so much that administration sat me down and had me draft a school law that prevented other students from abusing the middle school office bureaucracy the way I did. But he also remembered who I wanted to be—hanging out with my English teacher after school on Fridays because I didn’t want to go home, making spoofs of body wash commercials and writing poetry.

After being removed from Westlake classes with two months left until my promotion to ninth grade, I went on to become very involved in the arts. I got my diploma, took my SATs, got into college, and went in a different direction. At eighteen years old, I’m supporting myself while living in New York City—working to make ends meet while battling bipolar disorder and following my dreams. Mr. K created an environment that helped me find my calling, and gave me the ambition to pursue it. It was my experience in Westlake and the opportunity given to all students for unique self-searching and reflection that would later lead me to seek a diagnosis for my own quarrels with my mental health.

That understanding of the individuality of young people by an administrator and leader is crucial for individual and group success. If your definition of excellence is defined by your ability to breed cookie-cutter students that can recite helpful acronyms for standardized test-taking, and no outlet for their personal expression and experiences, perhaps Westlake would be better off with a principal that is not Misha Karigaca. That definition of success is a school that produces students that look good on paper—they get accepted into a very great University, where they have a wonderful dorm room with a nice window they can consider jumping out of during their first nervous breakdown halfway through their freshman year. I can’t promise I’ll be sending my children there.

However, if ever you are looking for a man who is committed to the individual excellence of young people, and strives to encourage each student’s specific interests, feel free to offer Mr. K his job back.